Galaxy Raider is a space themed Shoot 'em up game where the player takes the role of an anonymous Galaxy Raider. A spaceship long lost was after many years rediscovered but now with a hostile crew of space pirates and a serious case of alien infestation. Being a galaxy raider, the player fights his way through the ship to acquire the rumored pirate treasure. He dashes, jumps and shoots his way through enemies and other hazards along the way, making for a great adventure!

Galaxy Raider is a pretty straight forward Shoot 'em up with platformer elements in it. The player can jump on platforms, shoot enemies, find secret areas and blow stuff up.

However, we wanted the game to be more interesting than that. We wanted it to be fast paced, arcady, have some sort of player progression aswell as some hints of bullet hell.

To accomplish this we added both double-jump and a dash ability which teleports the player a few meters in the direction the player is facing.

Initially we decided that it was going to have a long cooldown and only be used as a last resort but quickly realized it was way to fun to limit it like that. Instead we decided on having only a few seconds cooldown on the dash ability and the player now felt as agile as we wanted. 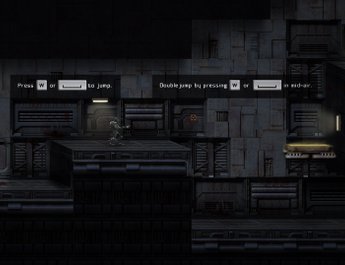 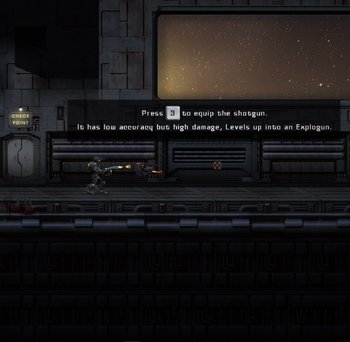 Since we also wanted hints of bullet hell in the game and the gameplay to be very fastpaced we suspected players would die quite a few times before clearing the game.

Because of this we littered the levels with checkpoints and made the respawn timer instant.

As this was game project was created in school and our class mates were our target audiance, we also removed almost all penalty for dying except for the enemies that respawn when you die.

To get the player to stay hooked we added three weapons that all had three different levels which made them stronger in different ways. To level up a weapon all the player had to do was to use it which resulted in the game catering to a wider audiance. An example is the shotgun which could be leveled up into firing missiles instead of bullets.

Being a 2D platformer shoot 'em up, Galaxy Raider was really well suited for making layouts with pen and paper. As I was in charge of two levels, one being the first level which contained a tutorial, I had to think about what kind of mechanics the player would have to be taught. I presented the player with a safe environment to try out all the different movement mechanics and then pitted him against his first enemy.

I placed the first enemy right next to a check point so it wouldn't make any difference if the player died.

After that I introduced a somewhat harsh skillgate focused on platforming, to make sure that the player would learn to move effeciently before taking on the rest of the game. Finally I combined enemies and environmental hazards and when the player passed that he had completed the level. 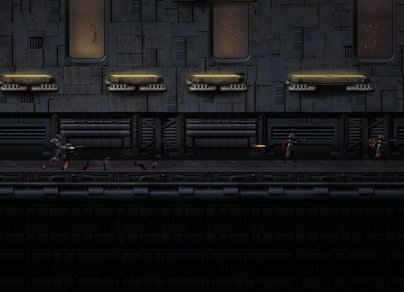 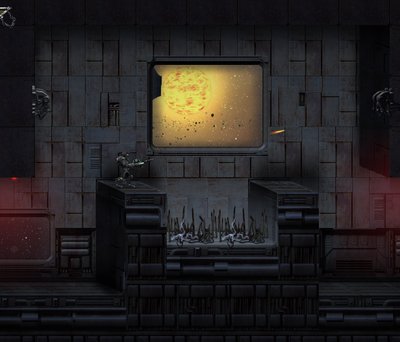 When I was done with the layout of a level I started building it in Tiled. To facilitate the process I made sure to draw all my layouts on grid paper since Tiled is grid-based. A lot of times I had to remake the level to some extent when going from analog to digital but the sketches sped-up the process as I had something to go on when building.

Once I was done with the basic layout I placed out enemies and exported it to our game engine to try out the level. I could then go back to Tiled to redo the layout or rebalance enemy or player health, damage, speed, etc. in our XML-sheets.

This is one of my favorite creations as I really grew a lot as a level designer during the project.