Pirates on an Island

Pirates on an Island is a co-op battle arena where up to 8 players can fight each other in three increasingly intense rounds of glorious pirate inspired combat.

Choosing from a wide variety of skills such as sending out your trusty parrot, shooting coconuts or summoning a line of tentacles to fight for you, you must eliminate the other pirates and become the one and only pirate king!

Pirates on an Island is based off of a game that is still in development called Spellsworn that in turn is based on the Warlock mod for Warcraft 3.

The main gameplay elements is that you're up to 8 players fighting against each other in a last man standing/king of the hill scenario where the island you're playing on keeps shrinking. As the match progresses and the map becomes smaller, the tempo increases to the point of insanity.

Each match consists of three rounds and each round you can pick two new skills, putting you at a grand total of six different skills on the last round.

This makes for very dynamic gameplay, for example Player 1 might keep knocking me out into the water that has deadly pirahna in it and so I counter this by getting a teleport skill. 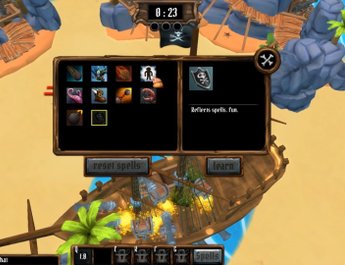 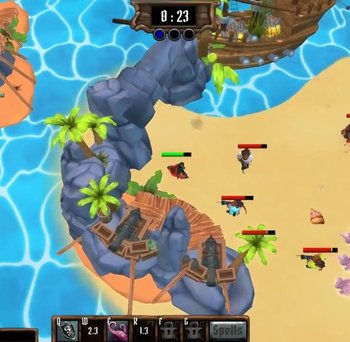 Pirate on an Island is a very fast paced game with focus on having really fun gameplay rather than putting too much time into balancing. We wanted people to feel like each spell was fun and interesting to use. It was really rewarding to play with friends and have them screaming with joy when winning and banging their hand at the table when loosing.

The two main ways player died in our game was either being pushed out of the map where deadly pirahnas would start nibbling away at the players health points or by looking like an easy target and everyone ganging up on one player.

Of course there were also counters to these scenarios as you could put skill points in Teleport, Speed boots, Spell reflect or putting up a Tentacle wall!

First of all I made sure to play a lot of Spellsworn, our reference game, to understand what it was that made the game fun. To me at least it felt like it was all about the spells, fast matches and the ability to turn the tide of battle in an instant.

I then began to work with what we called a floodmap which was simply a texture in grayscale representing the water level in the start of the match, how it would raise and what it would look like in the end of a match.

In the beginning of this process this made it difficult to get the placement of cover right as it had to be taken into account that the map would be changing during the course of a match, however it was a fun challenge and I think it turned out really well. 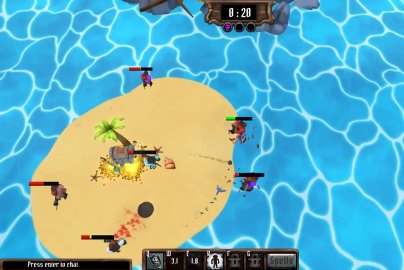 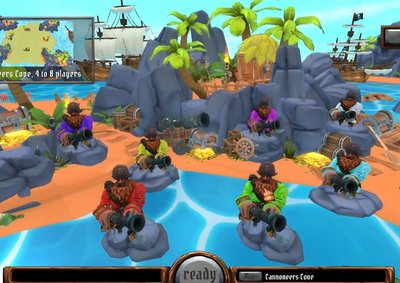 Except for making levels I was responsible for scripting the spells and events such as two pirate ships firing their cannons across the map.

I felt like it was really helpful to have spent a lot of time scripting in C# before this project, as there were a lot of spells that were to be scripted.

One of the perks of having your own game engine however was that I could just turn around in my chair and ask the coders for any functionality I needed.

That freedom of choice over what to put into the game is something I truly appreciated about this game project.